What exactly is hủ tiếu?

From what we have read, people seem to label it as ‘Pho’s cousin’. It is a delicious bowl of clear broth served with rice noodles, specifically hủ tiếu rice noodles. We pronounce it hue tiu. This dish is particularly popular in the south of Vietnam and is most often consumed for breakfast. While this dish is often served with boiled pork or seafood, we have been finding and conquering all the vegan hủ tiếu stands we can find in Tra Vinh.

While we have seen a few pho stands, hủ tiếu seems to win in popularity in Tra Vinh. This dish can be found on nearly every block and is being served at all hours of the day. Finding the vegan or “Chay” one is the tricky part. We find this dish to be very versatile. Each stand has a unique version with their own choice of veggies, spices, and proteins. Some people order it without the broth or with a bowl of broth on the side. Most places seem to use the same hủ tiếu noodle but there are a few that do not and are still called hủ tiếu. Lastly, most places provide an additional plate of lettuce or greens, more mint, and cilantro that can be added per each person’s own tastes. They also have soy sauce,  brown sauce, hot sauce, chilis, and limes.

Imagine, you’re on the side of a busy street….

Perhaps we should set the scene for these food carts/vendors, or in some countries called ‘hawkers’. Along the street, between or in front of businesses, a hungry passerby will find street vendors selling mostly food. They take over the sidewalk with little bitty plastic chairs, and tables that are almost exclusively red or blue. Usually a single cart with two or three people working it and large pots full of steaming broth. If a place is popular there will be over a dozen motorbikes parked on the street or on whatever sidewalk space remains. What appears chaotic at first actually runs quite smoothly. As most street vendors serve one dish, we simply sit at an open table and in a minute or two they bring a filled-to-the-brim bowl. Sometimes, while we take our seats, they look over from their cart, and await our confirmation. We say “hai” (two), they give us the head nod and the transaction is complete–they’ve got our order.  We have found that Vietnamese people eat rather quickly, at least compared to us which makes for some entertaining people watching. For us, we watch them, as they watch us. Somewhat confused, somewhat amused thinking about these foreigners who are a little too big for the plastic tables and a little to clumsy with the chopsticks. We usually see several tables turnover by the time we finish. Asking for the bill is always verbally exchanged, no bill/receipt. The only exception to this was before we knew numbers they would help us by taking money out of their pocket in the exact amount we needed to pay so we could see what bills to use.  In total, our bill ranges from $1-2 USD.

It requires a little more searching to find a vegan hủ tiếu carts, but we have located our favorites. Unfortunately, the nearest carts are a good mile away from campus. One might naturally think that working up a sweat and eating hot soup don’t go to together but, surprise, it does. Here is us scarfing down some steaming broth, delicious noodles, and cooked-to-perfection vegetables. Don’t mind Joe’s glistening, that’s the Vietnam-hủ tiếu combo. 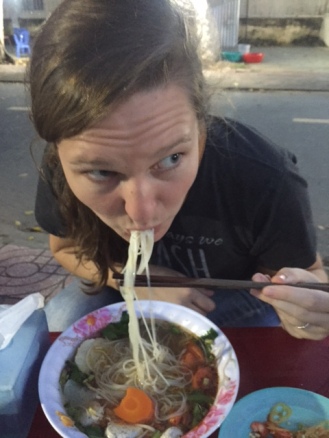 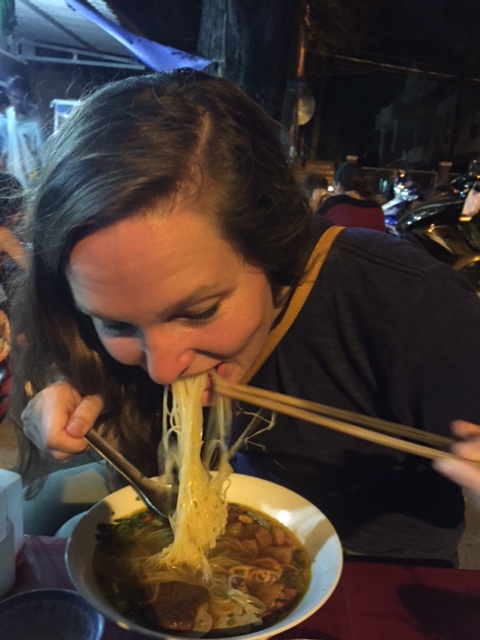 The burst of spices and depth of flavor nestled in the veggies on top is always mouth watering. Sometimes the bowl has peanuts in the soup, which for whatever reason, we love. After eating through some veggies we can dig down into the noodles. Sometimes, depending on the spiciness, we throw in some chili peppers or drop them into a small dish of soy sauce for dipping. The proteins come in a variety of forms. The hủ tiếu below features tofu skin, it is a dried out top layer of boiled tofu (we know, not at all an appealing description) and then placed freshly in the bowl before consumption. It almost tastes like and has the texture of the skin of a chicken or turkey. Other proteins would be some tofu squares or slices tofu made to taste like pork. Common vegetables/herbs include carrots, greens, corn, mushrooms, cilantro, potatoes or daikon, and mint.

Overall, this is a delicious and cost effective way to enjoy Vietnamese cuisine. I imagine this dish will stay in our weekly foods. Stay tuned for more scrumptious foods.

**It’s important to note that many blogs and travel sites warned that people should go to food vendors that were busy and had boiling broths. We were hyper aware of this early on, but have slowly let our guard down since we’ve got our ‘regular’ spots that seem to be having a quick turnaround with great food. So far, it’s worked out–Yay for us and our stomachs.