November 20 is Teacher’s Day in Viet Nam! Classes are canceled and most teachers have off until they join in the celebration in the afternoon. This year marks the 35th anniversary of the day to recognize the hard work teachers commit to for their students and their communities. We are fortunate enough to be working in Viet Nam during November and got to participate, even being invited up to the stage to receive flowers! The day is a National holiday and really started on the Saturday before (November 18) with a sports competition. Justine was scheduled to play badminton with her department and Joe played tug-of-war with his colleagues. There were also options to run a ‘marathon’ which was only 2 kilometers and other fun activities. Here is a picture of Joe playing. If you’re wondering they lost badly. No strategy. But, as you can see, one of the few dressed to play. 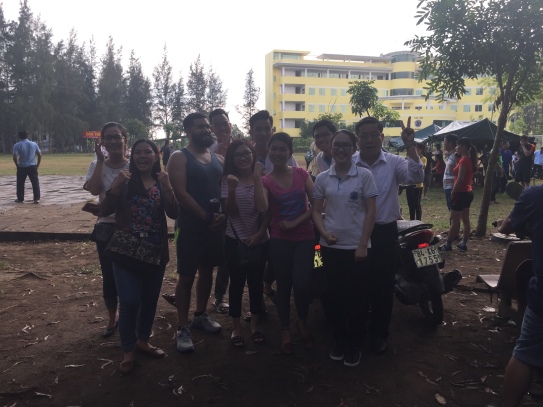 Joe representing with his fellow colleagues at Tug-of-War.

Other activities for Teacher’s day included a karaoke competition and student performances.  We were very much absent from those activities. Where the University really shined was the ceremony/celebration in the afternoon of November 20.  We joined the faculty and staff in the great conference hall at 3pm. We were met with with students in traditional dress ushering us in and we all sat with our own departments.

Justine was encouraged to wear a traditional Vietnamese áo dài (dress).  Thankfully, her co-workers had bought her the material beforehand and she want to the tailor to get a custom TVU dress made with matching pants. The dress is always custom made to fit the person wearing it perfectly. To make the pants and the dress, it cost about 300,000 dong (13 USD). The rest of the women wore the same dress, or at least a version of it. Most of the men dressed the same way, as well, including white button up shirts with a yellow or blue tie. The day was filled with a sea of blue and yellow apparel, the TVU colors.

The ceremony was like any other ceremony, lots of clapping and congratulations. It started with students performing a traditional Vietnamese dance and a traditional Khmer (Cambodian) dance. Then on to the awards for special faculty (time served or accomplishments)…and surprise, the foreign faculty and staff! We did not know this would be happening nor did we understand when the Vietnamese emcee called us up. We were gently pushed by our colleagues and they translated for us. There are two other Americans, several teachers from Philippines, Taiwan, and two others from France working at TVU.

Here we are with the other volunteers and the Rector (standing next to Joe). We are the the 7th and 8th from the left.

After the ceremony, the real party started! Right outside the conference hall, the staff had elaborately set up dining for 600 faculty and staff. Joe binged on noodle soup, rice, chicken, and seafood. Justine ate the most delicious vegetables (including a mushroom called chicken mushroom) in ginger sauce, veggie fried rice, and soup. Awkwardly enough, there was a designated table for vegan food and she would have been sitting there by herself if it wasn’t for her kind co-workers. She couldn’t believe out of all of the attendees, she was the only vegan. More food for her! In fact, she was able to take leftovers home.

Beyond the food, there was beer and karaoke. Not only was there karaoke at the celebration, many departments left to go to karaoke bars to unwind. We are learning that this is a favorite past-time. We joined Justine’s staff at a nearby Karaoke bar. Many of them changed before heading out, but many of them were still sporting their TVU apparel so it was a dead giveaway to what room they are in. Karaoke here is not like karaoke in the US. Instead of a dive bar where you have to have enough liquid courage to sing on “Karaoke Tuesday,” to random patrons, karaoke is seen as a way to de-stress. A group would reserve a specific room for just those invited. They serve beer, juice, chips, and fruit and bill the group for the time spent in there and the refreshments we enjoyed. Our co-workers are amazing singers and we butcher every song (when they badger us long enough to cave in to their wishes). They sing duets together, traditional songs, and English songs. 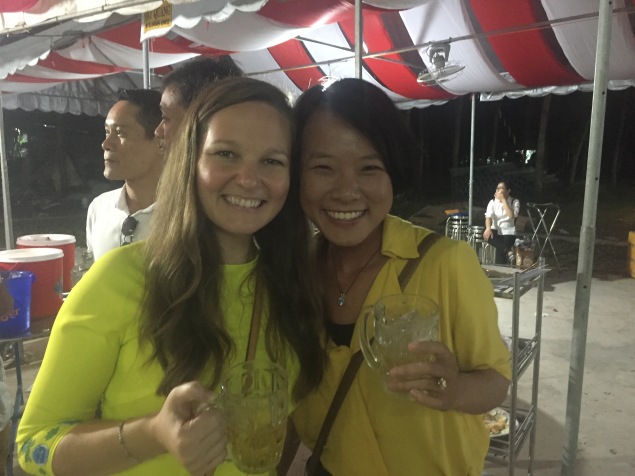 After Karaoke, we headed back to campus and to our amazement, the party at the conference hall was still continuing. We joined in for another round with the Rector and Vice Rector–hopefully we got some Vietnamese points.

We learned a lot about celebrations in Viet Nam and we’ll share more later. One part worth sharing is the way they drink. If a person is thirsty, they have to cheers with everyone at the table before they can drink. This is done over and over for each drink. No one takes a sip or chug by themselves. Often times, special toasts occur one-on-one and this includes toasts with special guests. This includes going to the neighboring tables to cheers with them, which sometimes sets off a competition of who can ‘celebrate’ louder.  We’ve become excellent at pronouncing “một, hai, ba, yo” (one, two, three, cheers!) and “ một trăm phần trăm (100 percent)–which means finish your drink). They will often say a number or percentage and that is the expected amount of beer you drink from your cup. Because we are considered special guests, many people want to cheers with us. Mostly, we oblige only because there is a gigantic piece of ice in our cup to chill the beer, but also to take up space so it isn’t a full beer.

We were worried that Post-Teacher’s day, our colleagues may be slow to start work at 7am, but sure enough, they were all bright-eyed and bushy-tailed and ready to start the week off right. They buried their heads back in their texts, computers, and work and did not look back. A testament to their commitment and the importance of giving them a day off.